Considered one of the most important French urban projects currently underway, the Lyon Confluence program is part of the agenda 21 initiative. When it is finished, this project to rehabilitate a 150 ha area located between the Saône and the Rhône Rivers, will represent a million additional square meters divided between housing, activities, and a shopping and recreation center, close to 20,000 inhabitants and 30,000 jobs for the city of Lyon and its suburbs!

The ambition of the ZAC (mixed development area) Confluence was to have a true approach to sustainable development. The design of the buildings thus required the ZAC to meet the HQE certification criteria and to benefit from European support through the Concerto program. In this context, the different architects and engineering and design firms turned to Schöck's products and expertise to deal with thermal bridges and to improve the envelopes of buildings with both exterior and interior insulation.

Most of the buildings were covered with specific cladding giving the entire ZAC Confluence a very original character, and avoiding most thermal bridging problems. Certain buildings, however required a different approach as a result of their interior insulation, and the inherent thermal bridges created by this design approach.

A building that is particularly, imposing due to its size and its architecture, is the Monolithe. This shows a rare example of mixed architectural and technical complexity, particularly due to its design around a large interior patio. With a total area of 28,000 m² (Net Floor Area), the Monolithe is the product of the dialogue between the project owner, ING Real Estate, and five European architects: Winy Maas (MVRDV), Pierre Gautier (PGA), Manuelle Gautrand (MGA), Erick van Egeraat (EEA) and ECDM.

From the project's inception in 2008, the performance objectives were very ambitious. The building envelope specialists on the project set a maximum psi value of 0.64 W/mK, even though the regulations in force at the time required 0.99 W/mK. Further complexity to this thermal requirement was added by the architects' choice of interior insulation, in order to leave themselves greater freedom with respect to the appearance of the facades. To achieve the required thermal performance and limit energy losses to the greatest extent possible, the structural engineers, building envelope specialists and construction company chose to turn to Schöck and its products and services.

In all, more than 2,380 m of Rutherma® (French type of Isokorb®) thermal breaks were installed on "the Monolithe" in order to deal with thermal bridges in slab-façade connection areas. The bimonthly support and assistance of the Schöck teams on the construction site assured the quality and the conformity of the deliveries to site, and provided expertise and invaluable advice to the construction teams. During the most intense period of the building's construction, more than 150 workers were involved in this project. The thermal breaks were installed from December 2009 to April 2010 during which Schöck remained on site to support its clients and partners. Thanks to the structural and thermal performance of Schöck Rutherma® thermal breaks, all thermal performance and energy targets for the project were obtained.

Schöck products and solutions were also used on 12 other buildings designed with exterior insulation in the ZAC. Schöck is currently continuing to work in the planning of further upcoming construction projects in the development zone. ZAC Confluence Lyon is planned to be finished in 2030! 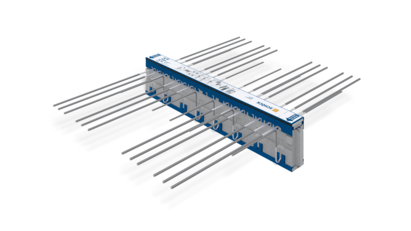