Schöck in the "Green Center". New Residential Complex in Linz.

In the Upper Austrian capital city Linz, a new urban district known as the "Green Center” is being created. It will provide about 800 apartments. In this context, the Schöck Isokorb® T is a substantial component.

Seven non-profit real estate developers are building a new heart for the city on an area of 87,000 m² in its geographical center – the largest urban development project in Linz for decades. As of 2016, a total of 800 apartments will have been erected and in accordance with the socio-demographic development, 50 assisted living housing units and a kindergarten – all on the site of the former freight railway station.

In this complex we wanted to create "a sea of green, stretching from private gardens, terraces, loggias and balconies up to the roof tops, " explained the city officials. This is also where its name comes from.

All objects are being built with net zero-energy efficient features. Solar collectors are being installed on many roofs to provide hot water. As part of the thermal insulation, Schöck’s Isokorb® T thermally separates elements while forming part of the structure. It is being used here on a massive scale in different variants. Around 1,700 units were installed in five different building complexes. The versatile range of Schöck Isokorb® T structural thermal breaks allowed the planners great scope for design and energy efficient solutions, since they not only offer thermal separation and additional fire protection but also freedom of interface access (e.g. balcony to living space). In addition to Isokorb® T, Schöck Dorn (shear reinforcement, heavy-duty dowel), Schöck Bole® (punching shear reinforcement) and the Sound Protection System Schöck Tronsole® (for stairwells) were used in many installations.

A total of 89 apartments with 75 balconies will be built whereby the ground floor apartments each have their own small garden. The roof surfaces are all planted. The living areas of balconies that extend outwards have an L-profile. The resulting visual plant staircase on the sunny facades creates the impression of a hanging garden for the residents and neighbors. This has a relatively striking effect and yet this version of gradation and the enclosed balustrades provides a certain degree of privacy for the inhabitants. To achieve the desired level of green, balconies are to have two flower boxes each (1.5m in length) that will be tended to by the residents. The three-meter deep balconies are thermally separated with Schöck Isokorb® T elements.

"We have done everything that is technically expedient to save energy. The Isokorb® T has been installed in the terraces and arcades" (Karrer). A solar system was installed on the roof. "All the green diminishes the specified high construction density," says the architect. Gradated terraces ensure that even in the courtyards there’s good light. The buildings were handed over in the summer of 2014. 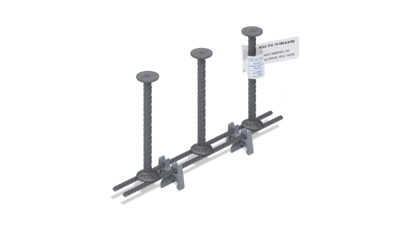