Supporting the 3000 sq ft (279 sq m) video board of the new U.S. Bank Stadium—home of the NFL’s Minnesota Vikings—required more of its architects and engineers than calculating load and moments of the steel support structure; they also needed to prevent the structure from forming condensation and rust on the warm interior side of the insulated building envelope due to thermal bridging during frigid winter months. Structural thermal breaks provided the answer.

How HKS and Thornton Tomasetti insulated a frigid 22.5 ton (20.4 tonne) exterior structure from the warm interior steelwork supporting it

Supporting the unconventionally large and heavy video board in its sub-zero exterior environment, are structural steel tubes cantilevered from the steel framework within the heated building envelope, requiring an inventive engineering solution on the part of HKS, the project's architectural firm, and its engineering firm Thornton Tomasetti.

The engineering firm of Thornton Tomasetti was charged with devising a plan for the board’s installation and overseeing the process. “The geometry was extremely complex,” said Greg Litterick, Senior Associate at Thornton Tomasetti. “We had to determine how to precisely adjust the structural supports and attach the video board, so that it would integrate seamlessly with the wall.”

Adding to the challenge was the thermal conductivity of the structural steel supporting the board. The board connects to an exterior metal panel, behind which sits an array of metal studs with an insulated waterproofing barrier – all surrounded by a steel superstructure. The high thermal conductivity of steel increases thermal bridging between the sub-zero temperatures of Minnesota winters and the heated interior of the supporting steelwork. “It was imperative to prevent cold exterior steel from touching warm interior steel and causing a thermal bridge,” said Eric Grusenmeyer, Project Engineer at Thornton Tomasetti.

Creating a thermal break between the exterior and interior sides of each steel cantilever is an Isokorb® structural thermal break, installed precisely where each support penetrates the insulated building envelope.

Each thermal break consists of a fabricated assembly the same approximate width as the insulated building wall that creates a structural insulated break between the exterior portion of a structural penetration and the interior structure that supports it. This minimizes thermal conductivity between the two masses, while optimizing load-bearing capacity.

The thermal break products specified are equipped with flanges and bolts for fastening to flanged rectangular steel tubes on the interior side, and on the exterior side to opposing flanged steel tubes supporting the video board.

The resulting assembly reduces heat loss through the penetration by up to 50%, reducing heat energy costs, carbon emissions and heating system capacity requirements accordingly. Most importantly for the video board application, they prevent the interior side of the supports from becoming cold, reaching dew point and forming condensation, which could compromise the surrounding structure and incur ongoing maintenance costs.

According to Lance Evans, Principal and Senior Vice President for the architectural firm HKS, which designed the stadium and board, “Our design had to address severe Minnesota weather conditions. Outside temperatures can dip to 20 degrees or more below zero, while the stadium has to maintain a comfortable temperature for the people inside. Preventing thermal bridging was essential to ensuring the integrity and performance of the stadium structure. The structural thermal breaks provided an effective barrier to accomplish that task.”

The board's rectangular support tubes cantilever at the building envelope to support the load of the video board, which is bolstered by horizontal and vertical girts to provide additional support.

The installation entailed 34 penetrations of the building envelope, each by a 6 x 4 in. (152 x 102 mm) steel tube. The tubes serve as outriggers that cantilever from the building structure in a grid pattern spaced approximately 9 ft (2.7 m) vertically and 8-to-17 ft (2.4-to-5.2 m) horizontally. Each tube is divided into two opposing flanged sections fastened on opposite sides of the thermal breaks.

The engineering firm selected Isokorb® steel-to-steel thermal breaks from Schöck North America. Each module is constructed with stainless steel bolts and a rectangular HSS within a 3 1/8 in. (80 mm) thick block of HCFC-free polystyrene foam insulation. The insulation reduces the transmission of heat and cold, thus minimizing thermal bridging between the cold exterior and warm interior sides of the bolted assembly

“The bolted steel plates can handle the significant structural stresses involved in securing the video board to the building,” engineer Eric Grusenmeyer said. “They are specifically designed for this kind of application.”

The contractor worked from an illustrated installation booklet and needed little more than the additional insulation spacers and a torque wrench for the installation.

Results and performance to date

U.S. Bank Stadium opened in July of 2016, in time for the Minnesota Vikings’ 2016-2017 home opener. The stadium provides such an outstanding experience that the NFL selected it as the site for Super Bowl LII in February, 2018.

Beyond aesthetics, the stadium's sharp angles and slopes shed and disperse high volumes of Minneapolis snow, while its transparent façade provides spectacular views, both of the Minneapolis skyline to visitors inside the stadium, and of the action within the stadium for visitors standing outside.

“The city and the team wanted to foster a sense of community among residents, visitors, and football fans alike," says HKS’s Lance Evans. "That was part of our original concept—to make a visual connection between the stadium and downtown Minneapolis.” 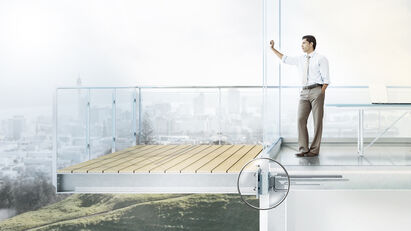