The striking facade of this building in Berlin is the concept of Sergej Dott, a locally-based pop art painter who chose medicinal herbs to represent the building's use as a major medical centre. The Treptow Medical Centre, named after the district in which it is located, is a 19th century listed building and recent refurbishment work has seen the interior transformed into twelve surgeries and a pharmacy. The final flourish of the restoration activity is the addition of the pop art herbs, each one metre in diameter, up to twelve metres high and 600kgs in weight, all grouped around three sides of the building.

To incorporate them into the structural design, additional steel beams had to be installed inside the building at varying floor levels and Lorenz Linnhoff, whose engineering firm carried out the structural planning for the building comments: "The optimum solution for fastening the giant flowers to the building envelope was the Schöck Isokorb® T type S, which made it possible to transfer the load of the flower installation via the steel beams to the load-bearing building".

The Isokorb® T type S has been developed to create thermal breaks in steel structures, where the modules are used to transfer tensile forces and pressure/shear forces. With this application the product is used only for the latter purpose, as on this occasion it has to perform a structural function rather than ensure thermal partition. Each flower is connected by two T type S modules at the top of the stalk and their modular capability meant that off-site pre-fabrication was possible, helping to reduce on-site costs. Two head plates were welded to the stalks off site and another two head plates attached to the main steel structure with the T type S modules bolted to them. Then flower stalk was then lifted into position and the two plates simply bolted to the exterior connections of the T type S units. The community arts and culture scene in Treptow will benefit too, as each of the herbs is to be sponsored, with the proceeds donated to various art institutions. 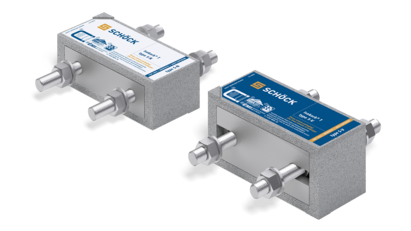 for new and renovation steel-steel structures